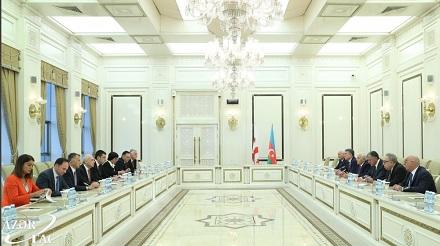 Axar/az informs that, speaker highly appreciated the guest's first official visit to Azerbaijan as Prime Minister. He expressed hope that the meetings held during the visit would further strengthen our friendship.

It was stated that both nations have always been together and supported one another. It is no coincidence that our states are strategic partners and allies. Negotiations held between the heads of state at different times have contributed to further deepening of our multilateral cooperation. More than 100 interstate and intergovernmental documents have been signed between Azerbaijan and Georgia. Last year, the trade turnover between the two countries was $ 580 million. In the first 9 months of this year, this figure was 440 million. Azerbaijan is one of the largest investors in the Georgian economy.

Asadov noted that high-level visits between our parliaments bring our legislatures closer together. It is gratifying that there are friendship groups in both parliaments. Our MPs have a common position on a number of issues within the framework of international parliamentary bodies. At the regional level, the tripartite cooperation between Azerbaijan, Georgia and Turkey is one of the key supporting factors for peace and comprehensive development in the region. "We are sure that the Azerbaijani-Georgian relations will develop and strengthen from year to year," he said.

Georgi said he made his first visit to Azerbaijan as Prime Minister of the Caucasus. He noted that no force can overshadow the Georgian-Azerbaijani friendship and brotherhood. Both nations have historically been close to each other and have lived in friendly and peaceful conditions. The fact that we face similar problems at a specific point in history has once again underscored the importance of security in the region. Conflicts in the region are a major obstacle to development. We stand for a fair solution of these problems within the norms of international law.

It was emphasized that the joint projects of the two countries have exceeded the boundaries of the region and are of global importance. Georgian Prime Minister stressed the importance of deepening relations at the parliamentary level, praising the participation and support of our delegations in international organizations.