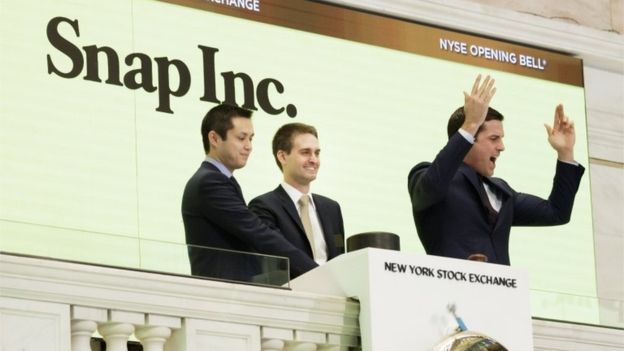 Shares in Snap, owner of messaging app Snapchat, have begun trading on the US stock market. In its opening minutes, its price hit $24.48 a share, a jump of about 40%.

Axar.az reorts that, the flotation valued the company at $17 a share, or $24bn in all, although Snap has never made a profit.
The firm's inital public offering (IPO) is the biggest for a US tech firm since Facebook in 2012 and will turn the company's founders, Evan Spiegel and Bobby Murphy, into multi-billionaires.
Snapchat, which is especially popular with teenagers, allows users to send images and messages which then vanish.

The company's losses widened last year, and user growth is slowing down in the face of intense competition from larger rivals such as Facebook.
Despite the challenges in converting "cool" into cash, Snap's valuation is the richest for a US tech flotation since Facebook in 2012.

At the beginning of February Snap's formal announcement to regulators of its plans revealed that the company had revenue of $404m last year, but made a loss of $515m.
Unlike in most listed companies, people who buy the floated shares in Snap will not get any voting rights.

Some analysts argued the company was overvalued.
"Snap is a promising early stage company with significant opportunity ahead of itself.
"Unfortunately, it is significantly overvalued given the likely scale of its long-term opportunity and the risks associated with executing against that opportunity," wrote analyst Brian Wieser from Pivotal Research in a note. He gave it a "sell" rating.