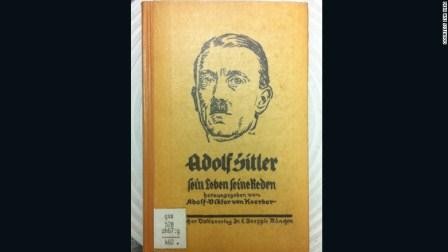 In what has been called a "shameless but clever act of self-promotion," a historian revealed that an Adolf Hitler biography -- originally thought to have been penned by a German aristocrat -- was in fact written by Hitler himself.

The book, written in 1923 and titled: "Adolf Hitler: His Life and His Speeches," helped propel the would-be dictator up the political ranks by presenting him as 'Germany's savior' and likening him to Jesus.

The biography was credited to Victor von Koerber, a military hero and writer, until recently when historian Thomas Weber from the University of Aberdeen in Scotland unearthed compelling new evidence that Hitler penned the book himself. He told CNN he was almost certain it proved Hitler's involvement.

Thomas Weber, a professor of history and international affairs at the University of Aberdeen, has uncovered Hitler as the real author of a 'biography' that boosted his rise to power.

In a statement, Weber said: "To find it was actually written by Hitler himself not only demonstrates that he was a conniving political operator with a masterful understanding of political processes and narratives long before he drafted what is regarded as his first autobiography, "Mein Kampf," but also challenges the accepted view that at this stage in his life he did not see himself as the man to lead the German revolution."

He said the book was an attempt to become "the new bible of today" by "likening his moment of politicalization to Jesus' resurrection."

"The fact Hitler wrote the biography and collated the speeches himself and put it together under a different name speaks to the fact that at a much earlier time he saw himself in this 'savior' role and that he started in a very manipulative way to plot his way to the top," Weber said.

The professor told CNN the discovery is significant because "it's kind of changed our ideas of how Hitler became Hitler and how he initially plotted his way up [the political ranks]." He says it not only suggests Hitler had plans to manipulate public opinion to gain power, but that it also played a crucial role in building his profile in German society.

He told CNN it proved Hitler was a "horrible, conniving and manipulative political operator" who knew he could use political narratives and processes to not only make a space for himself, but also to "create an expectation of a new kind of leadership that no one else could fill other than himself."

The discovery was made while Weber carried out research for his new book, "Metamorphosis: How Adolf Hitler became a Nazi." He stumbled upon Koerber's private papers in Johannesburg, South Africa, which suggested he had "merely been a front for the profile and not its real author."

Weber says he found several statements and letters written by Koerber, as well as a document from 1938 that alluded to the fact that Hitler and not Koerber wrote the book. He says the document stated the book was written "on the initiative of and with the active participation of Adolf Hitler."