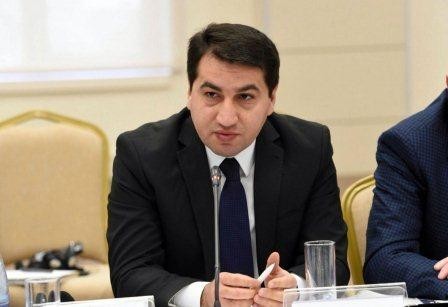 Hajiyev said that the policy being conducted by the Armenian military-political leadership is contrary to logic and far from civilized behavior and ethics.

"These actions, based on the thought of a field commander and military dictatorship, pose a threat to the entire region,” he said. “Today Armenia is in self-isolation and deep political, economic and demographic crisis due to the militaristic policy of Yerevan’s military dictatorship."

Hajiyev said that Armenia’s intensive violation of the ceasefire along the line of contact and on the Azerbaijani-Armenian border and other provocative actions once again testify to the essence of Yerevan’s regime.

“In this regards, Armenian officials’ statements on ceasefire, regional cooperation and conflict settlement cause laughter and disgust,” Hajiyev said.