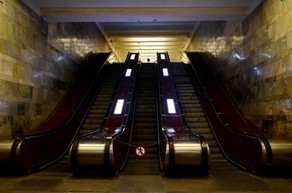 I vestibule of '20 January' metro station will be temporarily closed on July 1.

It was told by Nasimi Pashayev, spokesperson of 'Baku Metro' CJSC said.

According to him, period of exploitation of 3 ET-5 escalators at I vestibule of 20 January metro station expired and must be changed.