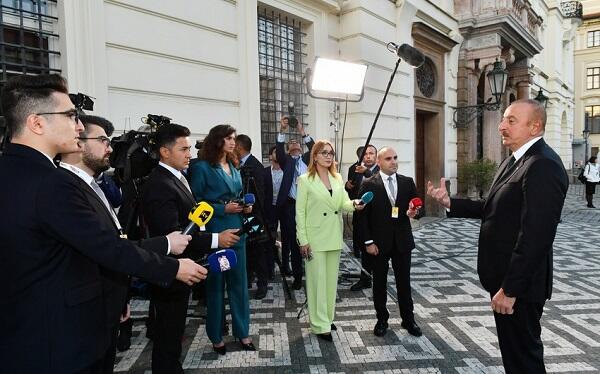 If Armenia is willing, the peace agreement can be signed by the end of the year. Time passes, our initiatives do not progress easily, although the first meeting of the foreign ministers did not produce concrete results, but I think that this is a positive step. I think that if a decision is made soon, the working groups of the two countries will start working on the text of the peace agreement, and we can reach an agreement by the end of the year.

Axar.az reports that President Ilham Aliyev said this while answering a relevant question in an interview with Azerbaijani TV channels in Prague.

The head of our state said that no one - neither the Armenian side, nor the Council of Europe - has any questions regarding the five principles announced by Azerbaijan:

"During the meeting with the President of France today, I saw that these five principles are accepted. This is natural, because we did not invent anything new. These are principles based on relations between states that want to normalize relations.