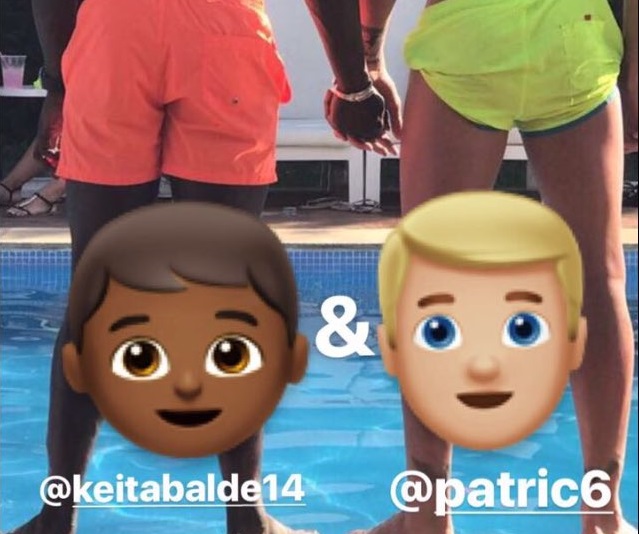 Pro soccer players Keita Balde and Patricio Gabarrón Gil (known as Patric) are teammates for the Italian soccer club Lazio and on Sunday they each posted on social media an identical photo that has people wondering if they are a gay or bisexual couple, playing a joke or just two guys showing affection and pushing boundaries.

Balde, 22, then retweeted the photo shortly after Patric’s tweet, which makes it look coordinated. The red heart and the two male emojis — one black and one white — could suggest that they are a gay or bisexual couple, but neither followed up with any detail or responded to comments on the post. I tweeted some questions to both that have so far gone unanswered.

They are obviously close teammates, as Patric, 24, has posted numerous photos of them together.

Until the men declare their sexual orientation we can assume nothing. It is Outsports’ policy to not call anyone LGBT until they do it themselves in some concrete way.

The tweet can be interpreted in multiple ways and I hope they address their intent. Maybe they are a couple and this was their way of going public. Maybe they’re playing with their fans for some reason or trying to make a statement about male friendship (the two were also on a youth soccer team together). The latter is reminiscent of Cristiano Ronaldo posting provocative photos two years ago with a male friend that also left a lot unsaid.

It would be cool if Balde and Patric — both were born in Spain — were in a same-sex relationship, especially since Balde is a rising star who is drawing interest from bigger clubs in Europe. It would also be a first for major European soccer to have an openly gay active player.

Each player has more than 40,000 followers and the tweet has gotten 2,500 likes and 1,800 retweets as of this writing. It was heartening to see the majority of Twitter comments either curious about whether they were gay or supportive if they were:

“If Keita is gay then fair play for coming out. Very bold. Sets a good message for other homosexual players that it's okay to come out.”

“Massive statement, one in this day and age shouldn't be necessary. But fair play for being honest. Best of luck to ye. Sign for Liverpool.”

“Wow very brave of you guys, could be a watershed moment for gay men in the sport. Much respect.”