Baku is one of the TOP-3 most sporty cities 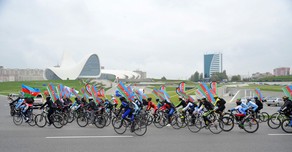 Travel.ru has found out which cities are the most popular among Russian tourists to visit sports events in May, 2016.

The three most sporty cities in May 2016 includes Moscow, which hosts the world championship in ice hockey; Tour d'Azerbaijan, Baku will host the cycling race; and Barcelona, which will host the Spain Grand Prix of Formula 1.

World Championship in ice hockey in Moscow and St. Petersburg will be held from 6 to 22 May, the Spanish Grand Prix Formula 1 will be held in Barcelona on May 13-15.