"I'd go to Championship as "Karabakh's" player 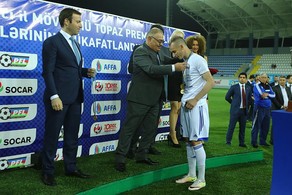 "In the end of the long road we achieved championship. I think it was very good championship for us. We tried to show our best. I am very happy for myself, my team, coaching staff, the club president to be champion again". Player of "Karabakh" FC and the national team of Albania Ansi Agolli said.

Although they won the championship for the third time, the 34-year-old defender said he wants to win the final match of Azerbaijan Cup with "Neftchi" on May 25: "I will try my best to help the team in the upcoming matches and to win "golden double".

Notably, Ansi Agolli plays for Garabagh since 2011. In the European Championship Albania is in Group A with France, Romania and Switzerland.