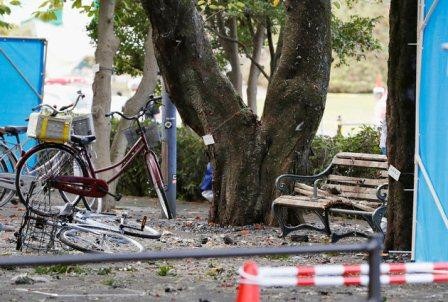 A 72 year-old retired soldier blew himself up in a park in the Japanese city of Utsunomiya, killing himself and injuring three other people in an apparent suicide.

A second explosion, separate from the blast that killed the former Self Defence Force member, caused a fire in a nearby parking lot, while the man’s home 8 km (5 miles) from the park burnt to the ground, the report said.

The police in the city, which is about 100 km (62 miles) north of Tokyo, said they had discovered a suicide note written by the man and were investigating the three incidents, but did not give further details.

Images broadcast by NHK showed two burnt out cars, one of which belonged to the dead man, about 200 meters (650 feet) from the park and a charred broken bench at the edge of the park, where a folk art festival was underway.

The explosion in the park injured two men aged 64 and 58, who were being treated for shrapnel wounds. The third victim was a 14 year-old school boy, NHK said. Witnesses told the broadcaster they heard a series of loud explosions.

Suicide rates have declined in Japan in recent years, but remain among the highest in the world, with around 30,000 people a year taking their own lives. Experts have pointed to the financial stress of surviving on small pensions for pushing some retired people to end their lives.

In 2015, a 71 year-old man set himself on fire on a bullet train in an incident that also claimed the life of a 52 year-old woman traveling in the same carriage.