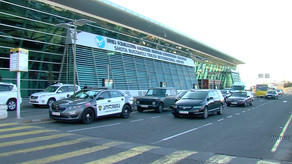 Tbilisi Airport is reportedly on lockdown after a bomb threat was received via phone call, local media reports say.

Georgian TV reports Tbilisi airport was evacuated on Monday afternoon. All flights have been suspended.

But one baffled passenger took to Twitter to write: "We are waiting as security deals with the situation.

"Everything is calm right now but some confusion among passengers as we wait."