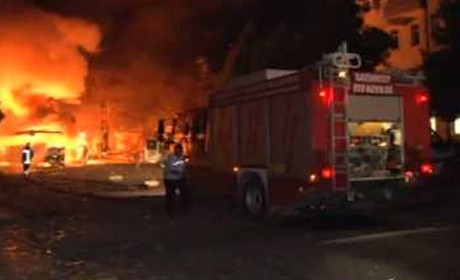 A powerful explosion and fire in Jaffa caused a building to collapse on Monday night, killing four people and injuring one critically. Witnesses describing hearing the explosion as far away as central Tel Aviv.

Initial reports from emergency services described a large fire and a collapsed building at the scene on Yeffet Street. The fire was subsequently brought under control and later extinguished.

Police, rescue and emergency teams discovered four people under the rubble and were confirmed dead at the scene, Israel Police said. Five others were taken to hospital, one critically injured and four suffering from light injuries.

MDA paramedic Matan Moshe Doshi said, "We received the injured man, approximately 40 years-old, unconscious and suffering from multi-organ injury. He was suffering from blast injuries and burns all over his body."

The injured were transferred to Wolfson Hospital for further treatment. Another three people were treated for shock at the scene.

According to sources, the building contained a construction material shop and was not a residential building.

The cause of the incident is being investigated but has not yet been established.