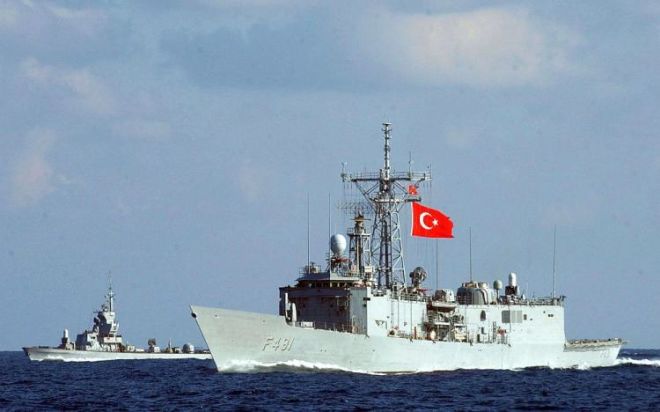 In a statement, Pakistan Navy said the ship reached the Aknaz Naval Base in the Aegean Sea off Mugla's coast on Saturday.

It will participate in the Dogu Akdeniz-19 (Eastern Mediterranean) drill which will run through Nov. 20, Capt. Muhammad Akram said.

The aim of the exercise is to operate in a multi-threat environment while providing advance training opportunities to the participants, it added.

The naval forces of the U.S., Turkey, Pakistan, Canada, Bulgaria, Romania, Italy, Greece and Spain are also participating in the drill.

“The ship will also participate in Operation Mediterranean Shield which is an ongoing operation in East Mediterranean Sea conducted jointly by various regional Allied navies headed by Turkish Navy,” said the statement.

Also, the naval forces conducted a joint drill in February in the Arabian Sea dubbed Turgutreis-III.

South Sudan next year, and he urged the country’s leaders to overcome their divisions and bring an end to the suffering of its people, reports Trend referring to Reuters.

Francis spoke of the crisis in the world’s youngest country three days after its president and a former rebel leader agreed to delay forming a unity government for 100 days beyond the Nov. 12 deadline, which itself was an extension of an original deadline last May.

Speaking at his weekly blessing in St. Peter’s Square, Francis said he “will have to visit” South Sudan next year.

A trip by Francis to South Sudan, which is predominantly Christian, had been tentatively scheduled for 2017 but had to be canceled because of political instability and poor security.

“I want to renew my invitation to all sides in the national political process to seek what unites them and overcome what divides, in a spirit of true brotherhood,” Francis said.

Last April, a month before the original deadline, the pope brought South Sudanese President Salva Kiir, opposition leader Riek Machar and other politicians to the Vatican for a retreat.

In a dramatic gesture on the last day of the retreat, Francis knelt at the feet of the previously warring leaders as he urged them not to return to a civil war that ended with a shaky peace deal in 2018.

Referring to the civil war in his lengthy appeal on Sunday, Francis said the people of South Sudan had “suffered too much in recent years... (and are) waiting for the definitive end of conflicts and lasting peace”.