Eiffel Tower to be lit up in colors of French flag 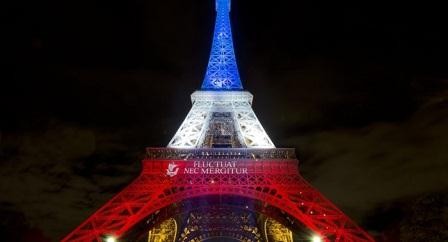 The Eiffel Tower in Paris is to be lit up in the colors of the French flag later on Friday in solidarity with the recent attack in the country`s city of Nice, the capital`s city hall said in a press release.

The Eiffel Tower is illuminated with neutral light from 22.30 local time (23:30 GMT) until 1 a.m. (02:00 GMT) every day. Sometimes it is specially illuminated, for example, it was lit up in the colors of the flags of Belgium and Turkey following terrorist attacks in their countries and in the colors of the rainbow flag following the deadly shooting in a gay nightclub in Orlando.

"Mayor of Paris Anne Hidalgo has decided to light the Eiffel Tower tonight and during the whole period of mourning [July 16-18] in white, blue and red colors," the press release reads.

On Thursday night, a truck plowed into a crowd of people watching fireworks during Bastille Day celebrations in Nice, France, killing at least 84 people and injuring dozens of others.

According to identification documents found inside the truck, the driver was a 31-year-old of Tunisian origin who lived in Nice. No group has yet claimed the responsibility for the terrorist attack in Nice.