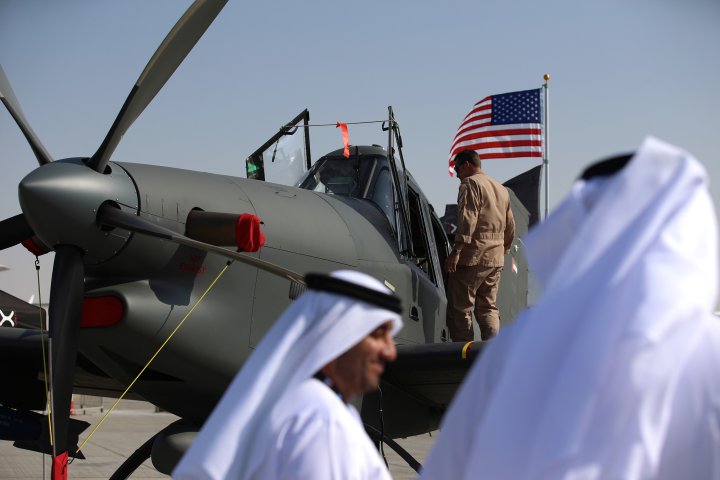 American military hardware is being used to undermine official U.S. policy in Libya, as the United Arab Emirates has deployed warplanes manufactured in the U.S. in Libya in violation of a United Nations arms embargo.

At least six U.S.-made turboprop planes appear in satellite images of an airbase in eastern Libya, deployed in support of the forces of rogue Libyan general Khalifa Haftar, whose army is fighting the U.S. and U.N.-backed government located in Libya’s capital, Tripoli.

The planes offer fresh evidence of a clandestine proxy war in Libya, in which Egypt, the U.A.E., and Russia are siding with Haftar in a military campaign against forces allied with the U.N.-brokered government. Officials in Haftar’s camp accuse Turkey and Qatar of arming Islamist-leaning militias.

The flow of weapons helps sustain a conflict that leaves Libya mired in chaos and split among three rival governments more than six years after the popular revolt that led to the overthrow of Muammar Gaddafi in 2011.

Military support for Haftar's forces could also complicate efforts to resolve the civil conflict through negotiations, efforts that the U.A.E. itself supports. In a diplomatic breakthrough last week, Haftar met the leader of the U.N.-backed government, Fayez al-Serraj, in Abu Dhabi. The rival leaders reportedly agreed on an outline of a deal to end the division between their governments, although no joint statement emerged from the summit.

The forces allied to the country’s two rival governments both command tiny air forces, and so the introduction of new warplanes could help tip the scales in a conflict where many of the fighters are armed only with aging assault rifles.