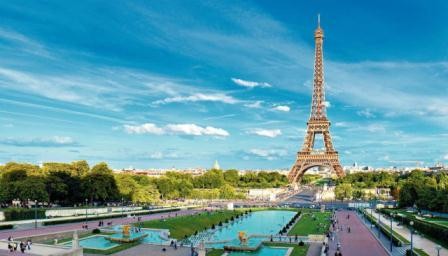 An evening dedicated to Azerbaijan as new, exotic destination for French tourists took place in Paris on 14 April, organised by the Nomade Aventure travel agency in collaboration with the French office of The European Azerbaijan Society (TEAS) and kindly hosted by the Cultural Services of the Azerbaijani Embassy in France, located in the shadow of the Eiffel Tower.

To information of TEAS, the event was attended by more than 120 potential travellers to Azerbaijan, eager to know more about Azerbaijani culture, history and tourism opportunities. The evening was supported by Ukrainian International Airlines, traditional partner of Nomade Aventure– which provided a tombola prize of flight tickets to Baku – and by the Qafqaz Baku Sport Hotel and Qafqaz Point Hotel that both offered two nights’ accommodation for the lucky winners.

Initially, Elmar Mammadov, Economic Advisor, Azerbaijani Embassy to France, explained that tourism is a priority sector for the country, and Issa Smatti, the Area Director of Nomade Aventure outlined the potential of Azerbaijan as a new key destination for this travel agency. Marie-Laetitia Gourdin, Director, TEAS, France, provided further information about Azerbaijan, focusing on its rich and vibrant cultural and historical heritage, together with providing some practical details on visitingthe country. Pierre Thilloy, French composer and formerly Composer-in-Residence for the French Embassy in Azerbaijan, shared his experiences of the country, which he first visited in 2001. An enthusiast for the country, he particularly concentrated on where to go to experience marvellous Azerbaijani food and the historic sites and areas of natural beauty that the country has to offer.

The presentation was followed by a visit of the museum and exhibition hall of the Cultural Service where the audience discovered the treasures of the country through artefacts and works of Azerbaijani artists. The audience then listened to an exquisite concert of Azerbaijani classical and traditional music performed by Azerbaijani pianist Etibar Asadli and Saddam Novruzbeyov on the balaban – a traditional Azerbaijani wind instrument – that mesmerised the attendees. Following the concert and the tombola, participants were invited to taste traditional Azerbaijani pastries, paklava and shakerbura, together with sampling healthy and energising pomegranate juice. Organisers are glad to report that several attendees have already asked for organised travels to Azerbaijan.