New buses will be brought to Baku 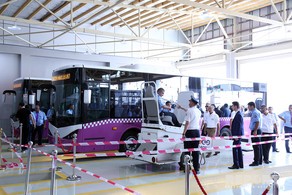 New passenger buses will be brought to the capital city in order to improve road transport in Baku, facilitate movement of passengers.

It was told by Fuzuli Sadigov, Chief of Public Relations Department of 'Khalig Faigoghlu' LLC, which will brought the vehicles to Baku.

According to him, 55 Turkish-made Isuzu buses will be brought until year-end.

'As other buses, new buses will also meet Euro 5 standard. It will distinguish for large passenger compartment, comfortable seats and modern technical equipment. Passenger capacity of the buses of 24 seats is 69 people. Buses' side windows reduce effect of sunlight nearly by 80%', F.Sadigov said.