Teen who walked while on life support home from hospital - Video 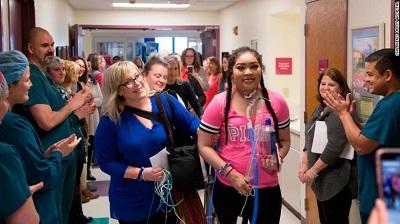 For the past 467 days, Zei Uwadia has been hospitalized on life support -- but that hasn't kept the quiet-natured teenager from walking, eating her favorite foods or even doing planks as exercise.

Now, with determination and strong-willed attitude, the student at North High School in Wichita, Kansas, is happy to finally be home.

"It helps a lot to have a goal in mind and just use that to motivate you and remember that you will get better; nothing's permanent," Zei said.

She arrived home on Thursday, the day before her 17th birthday.

Zei's mysterious medical journey began in October 2017, when she had difficulty breathing, desperately gasping for air. Her lungs were failing, but no one knew why.

As Zei's symptoms became more alarming, her mother, Brie Kerschen, took her to see an emergency physician. Zei was admitted to Via Christi Hospital St. Francis in Wichita. Then, on Halloween 2017, a medical flight transferred her to Children's Mercy Hospital in Kansas City.

Doctors performed several tests to determine what could be causing the otherwise healthy teen to suffer, and they found clues that her symptoms might have been part of a severe allergic reaction to the common antibiotic Bactrim.

Before being hospitalized, Zei was taking the antibiotic for an unrelated kidney infection, her mother said.

"I don't know if we'll ever be able to 100% prove it, but we have included her in a series of five patients that have all had reactions to antibiotics and had severe pulmonary failure," said Dr. Jenna Miller, a pediatric intensivist at Children's Mercy Hospital who has been working on Zei's case. She added that the five cases were specifically Bactrim reactions.

The hospital has submitted the physicians' findings to be considered for publication in a medical journal.