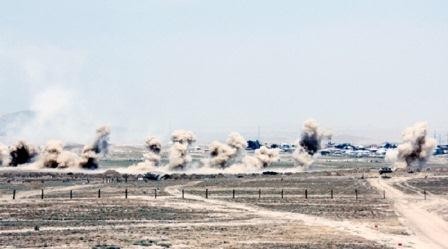 More than 370 Armenian servicemen have been eliminated by Azerbaijani armed forces since Apr. 2 as a result of prevention of Armenian sabotages, said Azerbaijan`s Defense Ministry in a message released April 5.

Six Armenian tanks, 15 artillery units and reinforced engineering structures were destroyed and more than 100 servicemen of the Armenian armed forces were killed in the shootouts on April 2.

Twelve servicemen of the Azerbaijani armed forces were killed, one Mi-24 helicopter was shot down and one tank was damaged on a mine.

Although the Azerbaijani armed forces have unilaterally stopped the retaliatory measures and counter-attacks on the frontline since Apr. 3, Armenians continued to aggravate the situation.

In order to return the lost positions, Armenians attacked the positions in Aghdere-Terter and Khojavend-Fizuli directions and intensively shelled the settlements near the line of contact.

Armenians suffered losses in manpower and military equipment in the shootouts on April 3.

Three Azerbaijani servicemen were killed in the fighting. Azerbaijan`s armed forces responded with crushing strikes on the Armenian positions.

As a result of the preventive measures and strikes by Azerbaijani armed forces, Armenians fled in panic, suffering heavy losses, leaving their positions and throwing down weapons and ammunition. The enemy retreated in panic.

Afterwards, 12 armored vehicles were destroyed and up to 170 servicemen of Armenia were eliminated as a result of a return fire by the Azerbaijani armed units.

Azerbaijan`s armed forces are working to construct engineering and fortification structures in the strategic positions that came under their control, and are carrying out visual intelligence and adjusting the fire.

A headquarters of the enemy`s military base was destroyed in the strategically important Magadiz, located on the main road that leads to the city of Aghdere.

On the night of April 4, three tanks of the enemy were destroyed along with their crews as a result of the strikes on the engineering and fortification positions.

In order to minimize the threat of damage to Azerbaijani settlements by fire from the opposite side, Azerbaijani armed units, deployed in the Khojavand-Fizuli direction, destroyed two tanks of the enemy along with their crews and up to five wheeled vehicles loaded with munitions.

Moreover, up to 70 Armenian servicemen were killed and around 20 military equipment of the enemy were completely destroyed by return fire during the operations carried out on April 4 and April 5.

Sixteen Azerbaijani servicemen were killed in the military operations in the last two days.