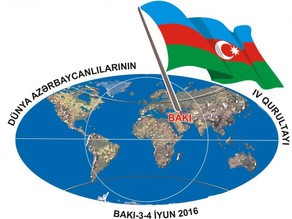 IV Congress of World Azerbaijanis has opened in Baku.

The two-day meeting will bring together over 500 diaspora representatives and guests from 49 countries. Well known politicians, public figures, scientists and senior officials from several countries, members of parliament will be among the participants.

After the official opening sessions of the Congress will continue their work on the panels.

During the event, representatives of the Azerbaijani diaspora will meet with heads of state and government structures.

At the end the congress is expected to adopt a number of documents.

The Congress will complete on June 4.