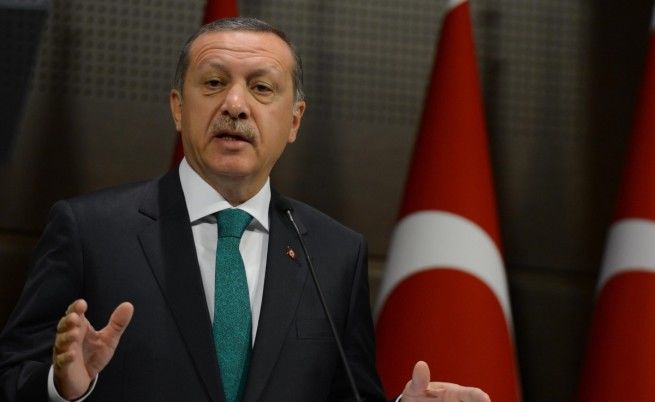 Erdoğan evaluated the victory of Trump while returning from Belarus, where he paid a one-day visit, answering questions from journalists.

Erdoğan said he believed that ongoing anti-Trump demonstrations indicated that people could not digest the mogul’s victory.

"I congratulated him on the first night he was elected. He will take over the duty of the presidency on Jan. 20, 2017. We can also meet before this date if possible. I said during the phone call that we would be pleased to meet reciprocally as soon as possible. I remarked that we would be pleased if Turkey is one of his first visits abroad. He responded positively," Erdoğan stated.

Erdoğan also said Trump’s team had a similar view to Iraq and Syria as Turkey.

"For instance, the no-fly zone issue is very important. They [Trump’s team] have similar opinions on this issue. This issue is a vital subject for us. Why? We are referring to the area that has been purged of terror.

But the area which was purged from terror should also be a no-fly zone. When that issue is solved, there is one thing to do: train and equip. We are already involved in training and equipping," he said.

In an interview with Wall Street Journal, Trump said he "had an opposite view of many people regarding Syria," adding that he suggested a sharper focus on fighting the Islamic State of Iraq and the Levant (ISIL) in Syria, rather than on ousting Syrian President Bashar al-Assad.

"My attitude was you’re fighting Syria, Syria is fighting ISIL, and you have to get rid of ISIL. Russia is now totally aligned with Syria, and now you have Iran, which is becoming powerful, because of us, is aligned with Syria. ... Now we’re backing rebels against Syria and we have no idea who these people are."

Trump said that if the U.S. attacks Assad, then, "we end up fighting Russia, fighting Syria."

Erdoğan also stated that Trump did not receive any money from the Gülenist movement.

"These demonstrations against Trump are temporary, in my opinion. I will not be surprised if the group that is protesting Trump, falls in line to get an appointment from him. Trump did not win the election by receiving money from FETÖ [Fethullahist Terrorist Organization]. He has financial power and he subsidized his election campaign by his own means. The rumors about the other side [Hillary Clinton] getting money from the [FETÖ] was reflected in the press. There is some news about those claims that will be investigated," he added.

Trump called roughly a dozen foreign heads of government the day after his election victory, including leaders in Ireland, Turkey, India, Japan and Mexico.