I want to meet Trump - Erdogan 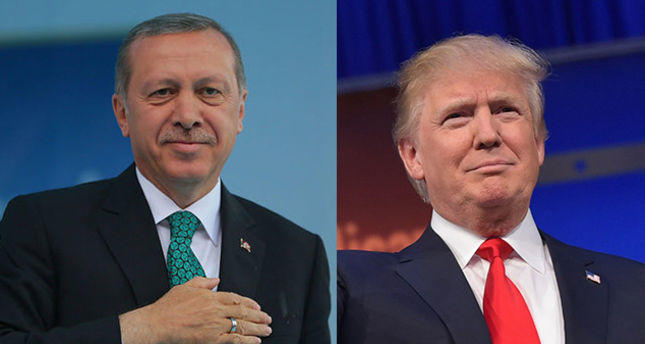 Turkey and the United States should take immediate steps to re-evaluate the strategic framework of bilateral ties after Donald Trump took the helm as the new U.S. president, President Recep Tayyip Erdogan has said.

“My wish is to meet Mr. Trump without much delay. On the top issues we’ll raise when we’ll meet will be making a fresh assessment of the Turkey-U.S. relationship within a strategic concept. Are our strategic ties running healthily now? No. We should make them healthy,” Erdoğan said while returning from Africa on Jan. 26.

One of the most important issues will be the Middle East as the Turkish-U.S. partnership in the region needs to be healthy, Erdogan said. “We are two NATO countries but it can’t be said that our current level of solidarity befits NATO countries. Of course, in that regard, we will also have the chance to learn better what Mr. Trumps meant with his recent statements on NATO.”

Trump recently described NATO as obsolete and an old-fashioned institution.

On the fight against the Islamic State of Iraq and the Levant (ISIL), the U.S.-led international coalition is yet to deliver the required support to Turkey, Erdoğan said, recalling that a fresh and positive process had begun in Astana to find a solution to the Syrian problem.

“I plan to hold a meeting with [Russian President Vladimir] Putin. There could also be an opportunity to hold a phone conversation with Mr. Trump before a face-to-face meeting,” he said.

Another important issue between Turkey and the U.S. is the need to further improve the economic relationship, particularly in the field of the defense industry, Erdogan said. “There were so many joint steps we have taken in the field of the defense industry until today. Will we continue through joint investments or through the logic of ‘You are the market, I am the trader?’ We prefer to continue with joint ventures,” the president said.