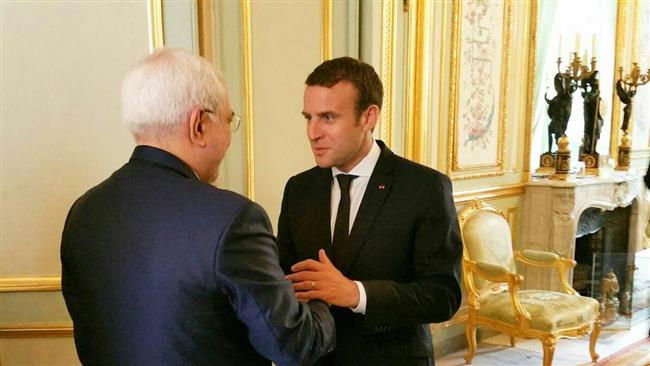 On the third leg of his European tour, Iran’s foreign minister visits Paris for discussions with senior French officials, including President Emmanuel Macron, on ways of promoting bilateral cooperation on issues of bilateral and regional importance.

Mohammad Javad Zarif arrive in the French capital on Thursday, the third destination in his European tour which took him to Germany and Italy earlier in the week.

Speaking to reporters upon his arrival, Zarif described France as one of Iran’s “close economic partners,” saying the two sides have significantly increased their cooperation in this field, especially after the conclusion of the 2015 nuclear deal between Tehran and six world powers.

The landmark accord put limits on Iran’s nuclear program in exchange for the removal of economic sanctions against the country, paving the way for a more active Iranian role in global trade.

Later in the day, the top Iranian diplomat held separate meetings with his French counterpart, Jean-Yves Le Drian, and President of the French Senate Gerard Larcher.

During his talks with Zarif, Le Drian voiced support for the 2015 nuclear deal, officially named the Joint Comprehensive Plan of Action (JCPOA), and said a variety of measures have been taken for the historic agreement to bear fruit.

The French minister later said on his Twitter account that he had held “necessary discussions” with Zarif in Paris.

Zarif, in turn, praised France’s diplomatic efforts during the lengthy nuclear negotiations in the run-up to the nuclear accord and said Paris also “played a significant part” in the successful implementation of the accord.

The Iranian foreign minister further called on the parties to the deal to hold up their end of the bargain, stressing that full commitment to the agreement is in the interest of all sides.

Iran, he said, “seeks the enhancement of ties with France particularly in the economic area,” calling for the removal of the excising obstacles to the expansion of banking ties between the two sides.

The two officials also discussed the latest developments in the Middle East and the Persian Gulf region, including the crises in Iraq and Syria as well as the dispute between Qatar and a Saudi-led group of countries.

In a separate meeting with Zarif, the president of the French Senate expressed sympathy with the Iranian nation over last month’s Daesh terror attacks that claimed 18 lives in Tehran.

He also said Paris attaches great importance to the expansion of relations with Iran and is willing to hold constant political consultations with Tehran on different issues.

The top Iranian diplomat, for his part, called on Europe to play a more active role in efforts to resolve regional issues.

On the second day of his stay, Zarif also met with President Macron at the Elysee Presidential Palace, where the two sides held talks on regional and global developments.

At the meeting, Zarif also delivered a written message from Iranian President Hassan Rouhani to the new French head of state.