What lies ahead for Pakistan's former prime minister 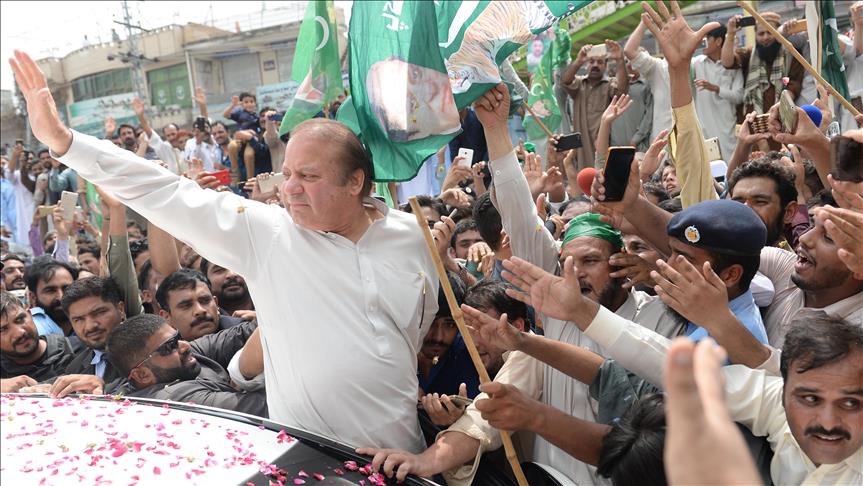 Several streets in cities across Pakistan’s most populous province Punjab have been plastered with life-size posters of former Prime Minister Nawaz Sharif, who was disqualified by the Supreme Court last month for concealing his wealth.

Axar.az reports citing Anadolu agency that, the posters, some of which read “Nawaz Sharif is still the people’s prime minister”, have been propped up by his supporters in preparation for a two-day march he will lead from the capital Islamabad to his hometown Lahore on Wednesday.

In between, Sharif plans to address public gatherings at 10 spots -- exactly like a march he had led in 2009 for the restoration of Supreme Court judges dismissed by the country's former military ruler Gen. Pervez Musharraf.

“Thousands of people are ready to welcome their leader and tomorrow we will show the world that Nawaz Sharif is still the leader of the nation,” Interior Minister Tallal Chaudhry said.

Punjab and its capital Lahore have been the power base of Sharif's Pakistan Muslim League-Nawaz party, which won more than 80 percent of its total seats from the province in the 2013 general election.

Local analysts view the rally announced by the party as an aggressive attempt to remain in the limelight by a politician who has never been allowed to complete any of his three terms as premier over the last 27 years.

“Aggressive politics is the only option left for Sharif in the given conditions,” Mazhar Abbas, a Karachi-based political analyst, told Anadolu Agency.

Disqualification by the court in a case linked to the Panama Papers is not the last of Sharif’s problems, he added.

“The threat of conviction in corruption cases that will be filed by the National Accountability Bureau [Pakistan’s anti-corruption agency] is still lurking not only on him but also [his brother] Shehbaz Sharif,” Abbas said.

The party will try to cash in on Sharif’s ouster to win a two-thirds majority in elections next year and introduce a constitutional amendment to support his return to the Parliament.

“It is unfortunate, but personalities make a huge difference in Pakistan’s politics,” Abbas added. “If he quits active politics, his legacy and the party will suffer.”

Sajjad Mir, a Lahore-based political analyst, agreed with Abbas’ perspective. “There are two options for Sharif: to compromise or to confront. Either way, aggressive politics will work out.”

Mir said an extraordinary show of public support might turn out to be a bargaining chip for Sharif’s return to parliamentary politics.

“Even if he chooses the path of compromise, he will be in a better position if he manages to show his public support,” he said.

Sharif’s political opponents see Sharif's planned power show as an attempt to influence the courts, which are set to hear multiple corruption cases against the former premier and his family.

Sharif insists that he has done nothing wrong and will continue his struggle for democracy and rule of law in the country.

His party leaders and ministers publicly blame a “foreign hand” rather than the powerful army or judiciary for Sharif’s removal.

Sharif, 67, resigned after the Supreme Court judgement and named his close friend and former petroleum minister Shahid Khaqan Abbasi as his successor for the remaining 10 months of his elected term.

In its verdict, the Supreme Court ruled that Sharif had not fulfilled Articles 62 and 63 of the constitution, which state that anyone who occupies a public office has to be truthful and trustworthy.

It said that Sharif had not declared a salary from a U.A.E-based company when he filed for nomination in the 2013 elections.

The judges also ordered for reopening and filing of several corruption cases against the former premier, his brother, two sons, daughter, son-in-law and the finance minister.

Sharif's lawyers say they are going to file a review petition against the judgement, which is likely to be heard by the same bench that announced the earlier verdict.