Erdogan to Putin: We need a ceasefire in Syria's Idlib 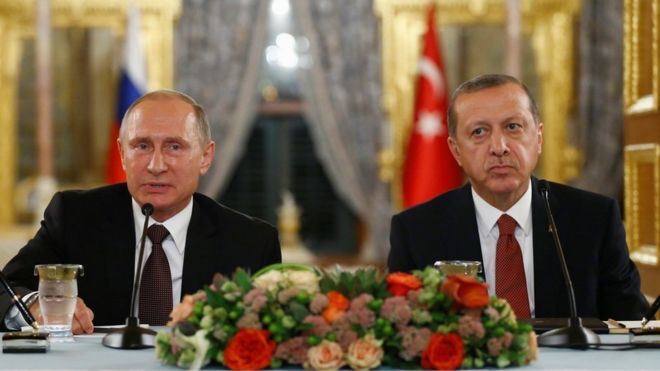 Turkish President Tayyip Erdogan told his Russian counterpart Vladimir Putin late on Thursday that a ceasefire in Syria’s Idlib must be implemented to prevent more civilian deaths and a refugee influx to Turkey, Erdogan’s office said in a statement.

Erdogan told Putin over the phone that Syria needed a political solution, the statement said.

The Kremlin, in its own statement on the Putin-Erdogan phone call, which was published on its official website, struck a different tone, however, making it clear it believed some fighting had to continue, underlining tensions between Moscow and Ankara over the issue.

“The importance of intensifying our joint work to stabilize Idlib province was noted, including the taking of effective measures to neutralize terrorist groups,” the Kremlin said in the statement.

A Russian-backed Syrian government offensive in the rebel-held northwest, the most serious escalation of the war between President Bashar al-Assad and his enemies since last summer, has uprooted around 250,000 people in the territory, the last significant rebel stronghold.

That has strained relations between Russia and Turkey, which borders Idlib and is keen to retain a degree of influence there.

Moscow, one of the Syrian government’s staunchest allies, and Turkey brokered a deal in September to create a demilitarized zone in Idlib that would be free of all heavy weapons and jihadist fighters.

But Moscow, which is keen to help Assad retake Idlib province, has since complained about escalating violence in the area and said that militants who used to belong to the Nusra Front group are in control of large swaths of territory.