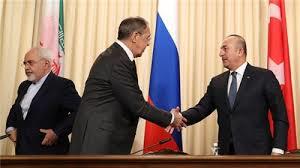 Astana peace process guarantors (Russia, Iran, Turkey) foreign ministers will hold a round of negotiations on Syria via video conference on April 22, the Russian foreign ministry told TASS on Monday.

"We confirm that trilateral ministerial Astana peace talks on Syria will be held on April 22 via video conference," TASS was told.

These talks will be held remotely online for the first time.

Earlier on Monday, Iranian Foreign Minister Mohammad Javad Zarif at a meeting with Syrian President Bashar al-Assad announced that the trilateral talks focused on Syria’s constitutional committee and developments in the Syrian province of Idlib would be held shortly.