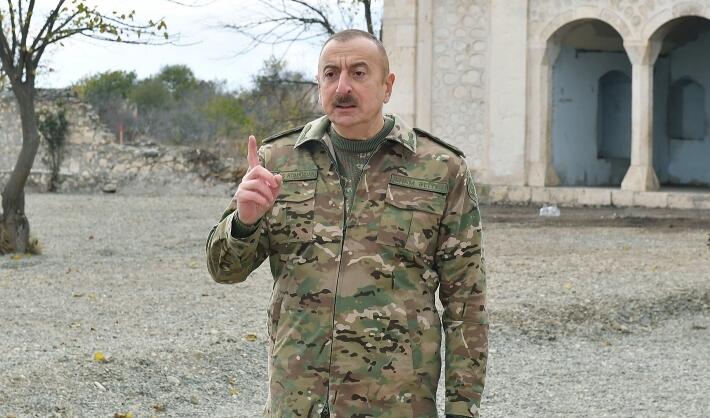 Almost from the first days of the war, in my numerous interviews and appeals to the people, I said that - all this can be lifted, everything is documented - give us history. I said, Pashinyan, you are not yourself, your foreign minister or defence minister, who was fired for this defeat, you, Pashinyan, must give us history, you must tell yourself, and I did it.

"If he had listened to me, he would not be in such a disgraceful situation now. I can say with certainty that we would have liberated our occupied lands already. But the enemy thought that someone would help him. He thought that all his supporters would come and fight us instead of them. It was a big mistake. After the liberation of most of Fuzuli, Jabrayil, Hadrut, Zangilan, Gubadli, Shusha, Sugovushan, Khojavend regions on the battlefield, the enemy fell to his knees and is on his knees today. We broke the enemy's back, we won a glorious victory. We have proved to the whole world that their legends and myths are all nonsense. There are more than ten thousand fugitives in the Armenian army and there would be more. If we carried out the planned operation in Agdam, thousands of Armenian servicemen would either flee or We have shown that the belligerent people are the people of Azerbaijan. We have shown that we will never reconcile with this occupation. I have said perhaps a thousand times in the last 17 years that we will not reconcile with this occupation. They thought that they would keep our lands under occupation forever. Because those who invested so much, built so many fortifications here, in Fizuli, in Jabrayil, wanted it too. There were fierce battles for several days for Soltanli village of Jabrayil region. They built fortifications there that may not have existed in the world. Why? They did not want to leave. They thought that they would live there forever. They wanted to Armenianize it," the head of state said.

Another 12 died of COVID-19 over the past day