This is a Hybrid War attack by externally linked forces 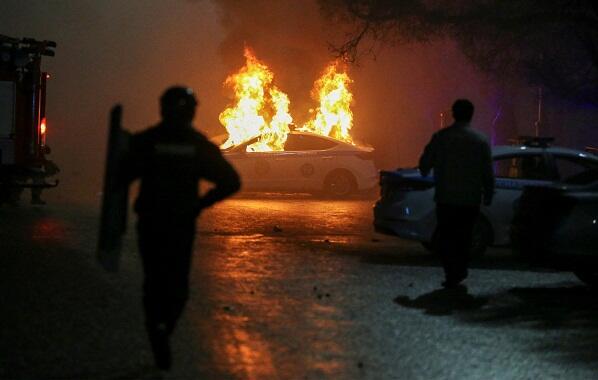 Axar.az presents the full text of the interview:

1. Why are these rallies held at this particular time? Is there a specific reason aside from what is on the surface?

The “trigger event” was the government’s preplanned removal of fuel subsidies due to their unsustainability for the state budget, yet it’s clear that ulteriorly motivated criminal and terrorist elements plotted far in advance to hijack the predicted protests that this move would provoke. This is evidenced by the fact that the apolitical anti-reform protests suddenly transformed into anti-state riots despite the government fully fulfilling the former’s demands to reinstate price controls. The government also resigned too, but this didn’t stop the core organizers from advancing their regime change campaign since nothing but the total seizure of power will satisfy them.
Some observers have wondered whether clan-connected tensions are driving the latest developments. While that’s definitely possible, it doesn’t explain the entirety of what transpired. President Tokayev described the perpetrators as terrorists, claimed that they received training abroad, and said that they threaten Kazakhstan’s territorial integrity while requesting the CSTO’s assistance on Wednesday evening. This suggests that the issue isn’t purely an internal one and that the country is under a form of Hybrid War attack by externally connected forces. The details haven’t yet been clarified, but his claims are credible considering the unprecedented destruction these forces caused in such a short time.

2. What is Russia's role in this turn of events in Kazakhstan?

Russia is Kazakhstan’s ally through the CSTO mutual defence pact and the Eurasian Economic Union. Both countries are also part of the SCO. Moscow called for calm and warned foreign forces from meddling in its neighbour’s affairs. The Kremlin is against any form of instability on its borders. What’s happening in Kazakhstan is especially concerning for Russia due to the visa-free travel regime between these two countries. Officials warned last year that terrorists could infiltrate Russia via the Central Asian Republics under the guise of refugees fleeing from Afghanistan. It’s possible that the terrorists presently attacking Kazakhstan could do something similar if they aren’t neutralized as soon as possible.

3. Was Nazarbayev's backing off the right decision in this period?

It wasn’t former President Nazarbayev who made the decision to have the government resign and to reimpose price controls, but incumbent President Tokayev’s. Anti-government elements and some foreign media forces speculate that the former leader is secretly running everything behind the scenes, but President Tokayev just replaced his predecessor as head of the National Security Council on Wednesday, which proves that this isn’t the case, or at least not any longer. Regarding the decision to give into the original protests’ demands, that was pragmatic since it was supposed to ease tensions but the apolitical anti-reform protests were hijacked by terrorist elements and turned into anti-state riots.

4. What about The US and West, what are their benefits and drawbacks from the Kazakh events?

The US-led West has extensive “NGO” influence networks all throughout Kazakhstan, but it’s unclear to what extent they might be connected to the latest events. Kazakhstan is actually a close American partner so the US doesn’t have much of an interest in destabilizing it. That country is part of NATO’s “Partnership for Peace”, hosts US biological laboratories, and is a central part of America’s “Strategy for Central Asia 2019-2025”. Washington also hopes to expand trade ties with Nur-Sultan too as part of its “economic diplomacy”-driven regional engagement. Nevertheless, it might be revealed that some Western forces could have played a role in events, even if only an indirect one.

For instance, the anti-Russian faction of the US’ permanent military, intelligence, and diplomatic bureaucracies (“deep state”) wants to sabotage the upcoming talks with Russia over de-escalating the undeclared US-provoked missile crisis in Europe. It’s possible that they leveraged their extensive network of influence in Kazakhstan to encourage anti-reform protests and possibly even hinted that they’d tacitly approve of – or at least not condemn – them evolving into anti-state riots. This is only speculation for now but that scenario could serve to advance their attempts to undermine the upcoming talks, though it’s unlikely to succeed if that’s what indeed transpired.

5. Does the Great Turkic Council and "Great Turan" idea have anything to do with these rallies? Are there any connections?

There’s no indication that either are connected. Turkey said that it values stability in Kazakhstan and expressed faith that the government there will resolve this crisis. Some foreign observers who are already antagonistic towards Turkey and its cultural diplomacy with other Turkic states have speculated that Ankara might be behind the latest crisis, but there’s no proof whatsoever to back up those claims. This seems to be reckless rumormongering in order to rile up Turkophobia like these forces regularly resort to doing for self-interested reasons. Instability in Kazakhstan could disrupt the Turkish-Chinese “Middle Corridor” through Central Asia and therefore isn’t in Ankara’s strategic interests.

6. The opposition mentioned several demands. To your opinion, have these demands been orchestrated by any third and external parties?

It’s difficult to confidently assess, but some of the demands at the very least seem predicated on attracting Western attention and subsequently their political support for the ongoing spree of urban terrorism against Kazakhstan aimed at propelling these shadowy forces into power. For the moment, it’s unclear exactly who’s behind this unrest and why, but there definitely seems to be some external party involved. It’s difficult to imagine that the perpetrators received their terrorist training inside Kazakhstan from native Kazakhs who never travelled abroad before or had any foreign contacts with terrorist groups or terrorist-supporting governments. They’ve caused too much damage for that to be believable.