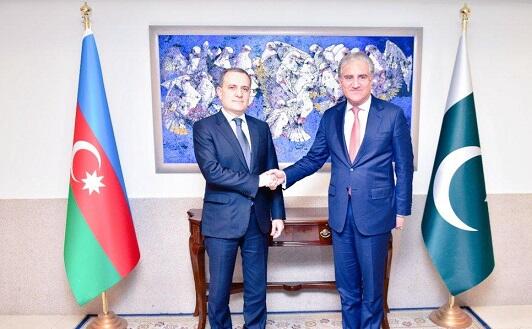 The ministers noted with satisfaction the high level of development of relations between the two countries in various fields. It was noted that cooperation was successfully implemented on both bilateral and multilateral platforms.

The ministers noted with satisfaction the intensity of contacts between the two countries over the past year, both at the level of the Ministries of Foreign Affairs and between other agencies. The sides exchanged views on the celebration of the 30th anniversary of the establishment of diplomatic relations between the two brotherly countries this year.

Referring to the meeting of the Azerbaijan-Pakistan Joint Intergovernmental Cooperation Commission in Baku in December last year, the sides stressed the importance of expanding cooperation in all areas.

The ministers also exchanged views on the results of the extraordinary meeting of the Council of Foreign Ministers of the Organization of Islamic Cooperation held in Islamabad on December 19 last year on the humanitarian situation in Afghanistan.

During the telephone conversation, Foreign Minister Mahdum Shah Mahmoud Qureshi invited his Azerbaijani counterpart to the 48th meeting of the Council of Foreign Ministers of the Organization of Islamic Cooperation to be held in Islamabad.

The parties also discussed other regional and international issues of mutual interest.