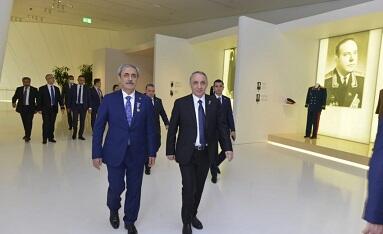 Axar.az reports that according to the press service of the Prosecutor General's Office, during the visit, the guests visited the Heydar Aliyev Center and were informed in detail about the museums and exhibits located there.

Today, the delegation led by Bekir Shahin got acquainted with the administrative building of the General Office for Combating Corruption under the Prosecutor General.

The guests also visited the administrative building of the Prosecutor General's Office in the residential area of ​​Darnagul, Binagadi district of the capital. Prosecutor General Kamran Aliyev briefed the delegation on the modern office building complex, which has all the conditions for effective work.

The official visit of the delegation led by the Prosecutor General of the Supreme Court of the Republic of Turkey Bekir Shahin to our country continues.

The public will be informed in detail about the visit.