FIFA named their team of the year - Photos 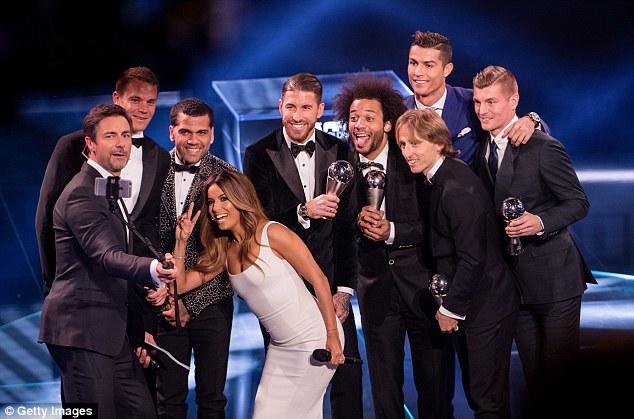 Five Barcelona players and five Real Madrid stars have been selected in FIFA's Team of the Year, with the Premier League totally snubbed.

The world governing body revealed their stand-out 'FIFPro World XI' at a glittering awards ceremony in Zurich on Monday, and Lionel Messi and Cristiano Ronaldo were unsurprisingly chosen to lead the line.

But not a single player currently plying his trade in England was deemed worthy of a place in the star-studded line-up. In fact, only one man not employed by Barca or Real in 2016 was picked - Bayern Munich goalkeeper Manuel Neuer. The rest of the positions were perfectly split between players who have represented either Barcelona and Real Madrid in 2016, the La Liga giants having five players each in the line-up.

It was no surprise that both Cristiano Ronaldo and Lionel Messi were chosen as two of the three strikers, Ronaldo having won both the Champions League with Real and the European Championship with Portugal, while Messi continued to dazzle for Barca.

The other forward position in FIFA's chosen 4-3-3 was given to Luis Suarez, who was honoured ahead of team-mate Neymar, Real Madrid and Wales's Gareth Bale, and most surprisingly Antoine Griezmann, who had been shortlisted for the men's player award but strangely did not make the cut here. The only outfield player not currently employed by either of the Spanish giants to make the team is veteran right back Dani Alves.
The 33-year-old Brazilian now plies his trade with Juventus, but played at the Nou Camp up until his transfer from Spain to Italy in July last year.

Gerard Pique and Andres Iniesta were the other Barcelona players given a place in the XI, while Real's other representatives were Sergio Ramos, Marcelo, Luka Modric and Toni Kroos. Neuer, meanwhile, was able to take the goalkeeper's spot ahead of either of the Spanish clubs' custodians, Keylor Navas or Marc Andre ter Stegen, by helping Bayern Munich to yet another Bundesliga triumph. He was also in goal for the Germany team which reached the semi-finals of Euro 2016 before being beaten by hosts France.