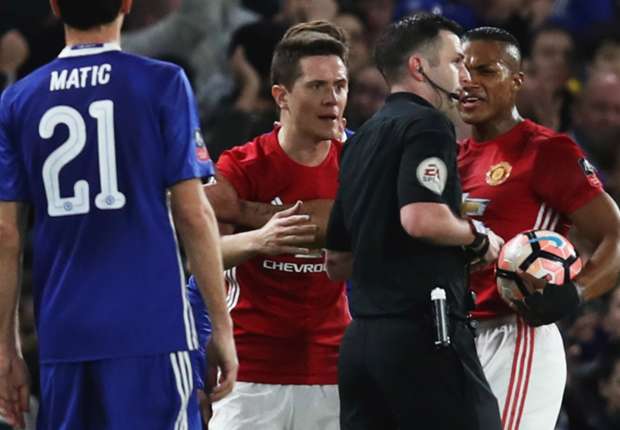 After Ander Herrera's sending off for a foul on Eden Hazard, the players surrounded referee Michael Oliver and have admitted to a charge of misconduct

Manchester United have been fined £20,000 by the Football Association for misconduct during their FA Cup quarter-final defeat to Chelsea on Monday.

The Red Devils saw Ander Herrera booked twice for a second foul on Eden Hazard, going on to lose 1-0 through a goal from N'Golo Kante.

Several United stars surrounded referee Michael Oliver after he brandished the red card in the 35th minute in protest, and the club were subsequently charged by the FA.

And the Old Trafford club have accepted the accusation of failing to control their players, resulting in a financial punishment.

"Manchester United have been fined £20,000 after the club admitted an FA misconduct charge and accepted the standard penalty," a statement on the FA's website said.

"It relates to a breach of FA Rule E20 (a) for failing to ensure its players conducted themselves in an orderly fashion in or around the 35th minute of their FA Cup quarter-final against Chelsea on Monday 13 March 2017."

Jose Mourinho did not heavily criticise the referee after the game, but pointed out that his club have poor luck with the official.

"This season Mr Michael Oliver, he is a referee with fantastic potential, but with Manchester United we are a bit unlucky," he said.

"In four matches, three penalties and one red card, and [the red card was] in such an early moment of the game.

"But, again, I cannot change that."

It was a contentious game for Man Utd and Mourinho, who replied to chants from Chelsea fans by waving three fingers at the crowd - one for each Premier League title he won there.

"When they have somebody that wins four Premier Leagues for them, I become number two. Until this moment Judas is number one," he quipped afterwards.