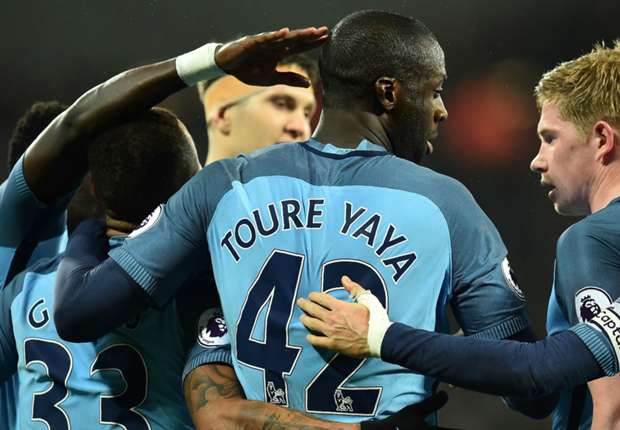 The Ivorian's agent Dimitri Seluk says the 33-year-old will sign for a rival club if he's presented a decent offer, name-dropping United and Chelsea

Yaya Toure's agent Dimitri Seluk has suggested the player is ready to leave Manchester City in the summer and that he would consider a move to Jose Mourinho's United.

The 33-year-old's contract with City expires in the summer, with Seluk insisting that Pep Guardiola's side have yet to make him an offer to renew.

And the player's representative has gone on to insist that Toure would join a rival if a suitable offer is put on the table, revealing that even United, and a reunion with Zlatan Ibrahimovic, would be an option.

He said, as quoted by Sky Sports: "At this moment the situation is like this; from yesterday we officially started negotiating with different clubs about his future.

"Some clubs have contacted me. Now we have three options. I don't speak about Yaya and China or the MLS. He will play in Europe. I have spoken with clubs in different countries; Italy and Spain.

"Clubs from England waited for the situation with Manchester City, but now we can speak in England and soon I will come to England for negotiations. Yaya must go to vacation already signed with another club."

When asked if Toure would sign for Manchester United, Seluk added: Why not? Jose Mourinho is a very good coach. Zlatan Ibrahimovic was together with Yaya in Barcelona.

"I understand this is two clubs who are rivals but for me, for example, this is not a problem from Yaya or from me, this problem will be from Manchester City staff.

"Yaya can, tomorrow, sign a contract with another club and after that for Manchester City it is too late. They don't say anything; he must stay or he must go. They can think it and Manchester City are one of the options. We are open to negotiations. But tomorrow, for example, if we heard with Chelsea, he will sign with Chelsea."

Toure had earlier insisted that he was happy at City, that he loved the club and was keen to remain at the Etihad Stadium.

Asked if he wanted to stay put he told Sky Sports: "Definitely. I love this football club.

After initially being overlooked by manager Guardiola, Toure was brought back into the first-team picture and has made 21 appearances in all competitions, scoring six goals.

He was left out of his side's 3-1 Champions League defeat to Monaco that saw them dumped out of the competition although did play 86 minutes of his side's FA Cup win over Middlesbrough.