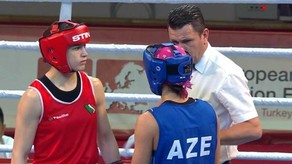 With this victory Yana Alekseevna (60 kg) reached the final and won the right to participate in the Rio 2016.
At the end of the tournament her opponent was a Bulgarian athlete Svetlana Staneva, who defeated Italian Irma Testa in the semifinals. Notably, in last year's World Championship three Azerbaijani boxers - Elvin Memishzade (52 kg), Albert Salimov (60 kg) and Parviz Bagirov (69 kg) won license to the Rio 2016.