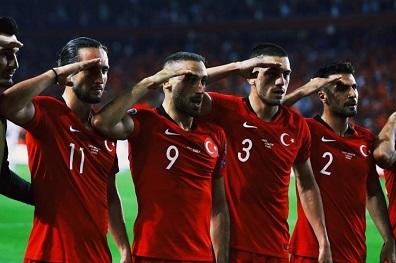 Turkey earns the late win against Albania, thanks to the header scored by Everton forward Cenk Tosun.

Turkey broke the deadlock in the 90th minute of the match in Istanbul's Ulker Stadium as Everton striker Cenk Tosun headed the ball into an empty net.

Albanian goalkeeper Thomas Strakosha rushed towards the ball to parry it but Tosun made an easy header to bring the victory for Turkey.

After the late winner, Turkish players made soldier salute celebration to refer to Turkey's anti-terror operation in Syria launched this week.

Turkey won the Group H match 1-0 and they are now waiting for the upcoming match against France.