Incredible track was built in Baku 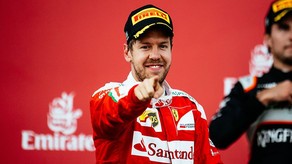 An incredible track was built in Baku for European Grand Prix.

According to the Italian edition MotoriOnline, it was declared by the German racer from Red Bull Racing's Sebastian Vettel.

"Thank you all, this is the first time the race is held here in Azerbaijan, we do not know what to expect, but it was an amazing weekend, beautiful track," - said S.Fettel at the end of races.

He said that his team did a great job. "We did what we could, I'm proud of the team ..." - said the German driver.

S.Fettel noted that he liked the track, "because in some places you had to attack and be very aggressive, and it was very easy to make mistakes there."

He also pointed out that there was not an accident during the race, due to the level of professionalism of drivers.