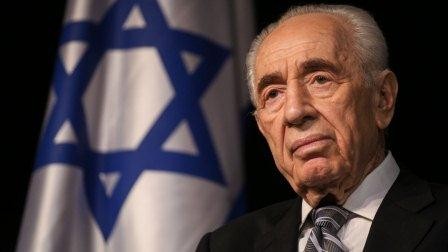 He suffered a stroke two weeks ago and his condition improved before a sudden deterioration on Tuesday.

His son Chemi led tributes to "one of the founding fathers of the state of Israel" who "worked tirelessly" for it.

Mr Peres, who was one of the last of a generation of Israeli politicians present at the new nation's birth in 1948, served twice as the country's prime minister and once as president.

He won the Nobel Peace prize in 1994 for his role negotiating peace accords with the Palestinians a year earlier.

He once said the Palestinians were Israel's "closest neighbours" and might become its "closest friends".
Mr Peres died in a hospital near Tel Aviv early on Wednesday, with his family at his bedside.

He had been in the intensive care unit of the Sheba Medical Centre after suffering a major stroke on 13 September.

He "left us without suffering", said Rafi Walden, his son-in-law.

Mr Peres's son, Chemi, said of his father: "He served our people before we even had a country of our own.

"He worked tirelessly for Israel from the very first day of the state to the last day of his life.
"My father used to say - and I'm quoting - you are only as great as the cause you serve."

Israel's Prime Minister Benjamin Netanyahu expressed his "deep personal grief on the passing of the beloved of the nation".

Meanwhile US President Barack Obama called Mr Peres his "dear friend" in a statement, and said: "He was guided by a vision of the human dignity and progress that he knew people of goodwill could advance together."
Mr Peres shared his Nobel Peace Prize with Prime Minister Yitzhak Rabin, who was later assassinated, and Palestinian leader Yasser Arafat.

Who was Shimon Peres?

First elected to the Knesset (Israeli parliament) in 1959

Served in 12 governments, including once as president and twice as prime minister

But played a key part in reaching the Oslo peace accords, the first deal between Israel and the Palestinians,

which said they would "strive to live in peaceful coexistence"

At the start of his long political career, he was put in charge of personnel and arms purchases for the Haganah, the predecessor of the Israel Defense Forces.

He secured a deal with France to supply the new Israeli nation with Mirage jet fighters. He also set up Israel's secret nuclear facility.

He was the defence minister in 1976, when Palestinian hijackers diverted a plane from Israel to Entebbe in Uganda. He oversaw the successful rescue of more than 100 hostages.

Once an advocate of Jewish settlements in the occupied West Bank, Mr Peres later became a leading political dove. He often spoke of the need for compromise over territorial demands in Palestinian areas.

He maintained an active public schedule into old age, mostly through his non-governmental Peres Centre for Peace, which promotes closer ties between Israel and the Palestinians.