Azerbaijan is the rapidly developing country in the Caucasus 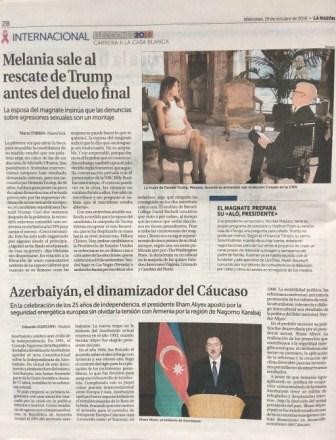 Spanish La Razón newspaper has published an article headlined “Azerbaijan is the rapidly developing country in the Caucasus”.

“The first years of independence were characterized with crisis in internal and foreign policy. Azerbaijan lost 20 per cent of its territory as a result of the aggression and ethnic cleansing.” “The new history of Azerbaijan started in 1993 when Heydar Aliyev was elected as President of the country.”

Guaylupo highlights the signing of a ceasefire agreement between Azerbaijan and Armenia, the Contract of the Century and TRASECA agreement in 1998.

He attributes political stability, economic development as well as multiculturalism, tolerance and inter-cultural dialogue to the policy of national leader Heydar Aliyev.

Guaylupo says that despite its problem of more than one million refugees and IDPs that emerged in the wake of the Armenian aggression, Azerbaijan became the rapidly developing country in the South Caucasus under President Ilham Aliyev.