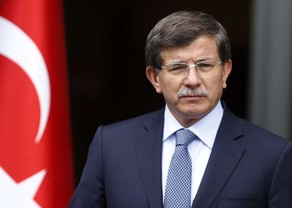 Anti-terrorist operations in Turkey will continue in order to assure complete safety.

Prime Minister of Turkey, Ahmet Davutoglu said that, responding to questions in the framework of the PACE session in Strasbourg.

"If the PKK , ISIS and other terrorist structures carry out mining, employ snipers, blow up, I have to stop them.And this will continue until all Turkish citizens will feel safe.Operations will not end as long as Turkey is in ubiquitous safety", said Davutoglu.

Commenting on questions of deputies, the Turkish Prime Minister denied allegations that the Syrian refugees are under attack in Turkey:"There is not a Syrian refugee who does not feel safe in Turkey."

Responding to a question about the situation with human rights and media in the country, Davutoglu stressed that no Turkish edition being attacked, they all operate freely, and all citizens of the country have uniform rules."No one will be isolated in our country either by ethnicity or by religion.All citizens have equal rights", Davutoglu said.

"You have wrong idea about Turkey. There is no need to be subjected to propaganda pressure", he added.