7 members of a family killed in car crash 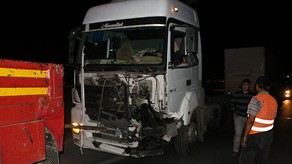 Seven members of the same family were killed Monday in a traffic accident in the southeastern city of Sanliurfa.

The accident occurred when a car driven by Omer Kaya collided with a long-haul truck as the family was returning from his son's wedding, sources said.

Kaya, an imam in Sanliurfa, wanted to return to the city early Sunday to recite the morning prayer after his son, Halil's, wedding ceremony in the Suruc district of the province.

"We celebrated the wedding and returned home. He gave us a lift. We said, 'Don't go,' but he said 'I am going to home for morning prayer.'" Halil told Anadolu Agency.

Relatives of the family fainted as the bodies were taken to the morgue.