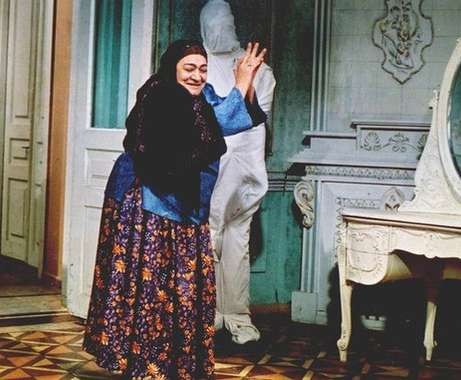 She was born to bring joy to people, to make them laugh and forget their problems for a while at least, and fill them with positive energy.

Nasiba Zeynalova, brilliant actress with unbelievable talent, started to star at the very young age. Her every character conquered hearts of millions bringing the wonderful women to the peak of art.

Her each performance was a long-awaited fun for many art lovers, people loved this admirable young actress for her sincerity, unforgettable performances on the scene and excellent communication with spectators.

Queen of laughter, Masiba was truly a brilliant actress and a unique phenomenon in the history of Azerbaijani art.

By her creativity and skill Nasiba confirmed the well-known expression "there are no small parts, only small actors".

Many describe her as a woman with a strong character, and stunning look, and a woman with an amazing sense of humor and touching smile.

She is probably the only “mother in law” loved by almost all the nation, since many remembered Nasiba as “great Azerbaijani mother in law” for her remarkable role at the same name musical comedy.

Nasiba Zeynalova’s contribution to the development of national cinema is so great that the actress left this world not just on any day, but namely on the National Theatre Day on March 10, 2004.

The wonderful actress who dedicated her 70-year-life to Azerbaijani art scene, starred in 40 films and performed in dozens of plays, creating unforgettable images.

The history of this remarkable actress originated from 1916, when little Nasiba was born in Baku in the family of a merchant and a talented actor Jahangir Zeynalov.

Her father played an important role in the development of Azerbaijani realistic theater, perhaps her creativity was inherited from father. Her father was a wealthy man from a noble family and always supported the actors, pay them salaries, and tried not to break up the troupe. In his estate, Zeynalov created a large hall for rehearsals and even built there a scene.

Nasiba was a late child, as her mother Husniya, could not have children for a long time. She even made a pilgrimage to the Kaaba to ask God to send her long-awaited baby. When Nasiba was finally born, doctors said that she would be a very happy girl.

However, her happiness was short-lived, as after Zeynalova lost her father at early age, the family lost everything and lived in poverty. Therefore, Nasiba had very difficult childhood and had to work since she was just 14 years old. She had to leave school to get a job.

Everything changed after the girl met famous Azerbaijani theater director Shamsi Badalbeyli, who at that time was director of the Philharmonic troupe. He could see the potential of the young girl and offered her a job.

At first her mother was against this idea, but Nasiba managed to persuade her. The talented actress also has beautiful voice. However, having worked in the Philharmonic Hall for some time, she was fired by the head of the dance group, who considered her unattractive for the stage.

Her luck finally turned around, and when she was just 21, Nasiba Zeynalova already toured around Azerbaijan as part of a traveling theater group. It was impossible not to notice the talent of this 22-year old young lady.

She became the loveliest actress at the Azerbaijan State Musical Comedy Theatre. However, the actress dreamed to get an education, so she entered the Theatre College to study at the Acting Faculty in the same year.

The first attempt to make a family was unsuccessful for Nasiba, but the second turned into a real joy. Her husband, Muttalib Novruzov was a great musician, teacher, who performed in kamancha (national musical instrument) and taught mugham (national music).

Their life together was a story of friendship and love lasting for 42 years, during which Nasiba used to forget all the sorrows of the past.

Their love story worth filming, as it began with a tempestuous scene of sorting out their relationship and a slap.

The fact is that, once the two lovers were involved in the same shooting. Zeynalova was always very bright, cheerful and sociable woman. Novruzov was the jealous type, who did not like her manners to be a loud laughter. After the performance Mutallib went to the dressing room, and angrily demanded an explanation, why she was laughing so loudly with the other members of the group. She asked in surprise: "Do not I have the right to do so?" He said: “No! You do not!” and suddenly he slapped her, and while she was in shock from all that is happening ... he kissed her.

Thus, so rapidly, in Azerbaijani and Caucasian manner Novruzov told her about his feelings and intentions. And since then they never split up.

They loved each other so much, that after Muttalib’s death Nasiba lost interest in life. Many say if not the death of her husband, she would live 120 years, since she was physically very strong and healthy and looked great, much younger than she was.

The worthy successor of the family's creative traditions has become their only son, whom she named after his father Jahangir, who is continuing his creativity as an actor in Turkey.

In respect of her son, Nasiba was sorry about the one thing, that she left him alone without siblings, referring to the fact that she had no time for thinking about the second child, because of busy schedule.
During her creative career, the actress has received numerous awards including medals, a badge of honor, and titles.

Despite the creative nature, Nasiba was 11 times elected as a member of parliament. Azerbaijani Youth Theatre, an oil tanker in the home port of Taganrog, was named in honor of this great talent.