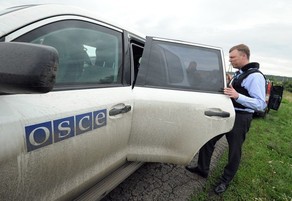 On 5 October 2016, the Office of the Personal Representative of the OSCE Chairperson-in-Office, in accordance with its mandate, plans to conduct the next ceasefire monitoring exercise on the LoC, in the vicinity of the village of Gyulyustan (Goranboy region).

The Personal Representative ambassador Andrzej Kasprzyk and his field assistants Hristo Hristov and Peter Svedverg will carry out the monitoring exercise from the territory of Azerbaijan.

The desk officer for Armenia and Azerbaijan of the Ministry of Foreign Affairs of Germany Klaus Keller, The Personal Representative`s field assistants Ghenadie Petrica and Simon Tiller will carry out the monitoring in the territory of the Republic of Azerbaijan occupied and controlled by the armed forces of Armenia.