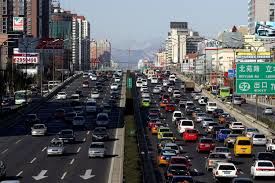 Shares of U.S. automakers General Motors Co and Ford Motor Co skidded on Wednesday after a Chinese official warned the government could slap a penalty on an unnamed U.S. automaker for monopolistic behavior.

Axar.az informs, the warning from a senior Chinese state planning official, conveyed through the official China Daily newspaper on Wednesday, came days after U.S. President-elect Donald Trump questioned the longstanding U.S. policy of acknowledging that Taiwan is part of "one China."

Trump's rhetorical challenges to long-established policy toward China have rattled U.S. corporations. Relying on stable U.S.-China relations for more than 40 years, the companies have ramped up sales in China and developed complex supply chains that feed Chinese-made parts to their U.S. operations.

Chinese officials have demonstrated they will use regulatory sanctions against U.S. corporations during times of diplomatic discord.