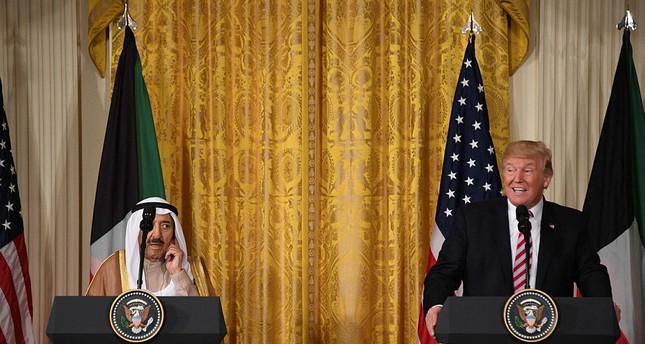 U.S. President Donald Trump on Thursday said he would be willing to step in and mediate the worst dispute in decades among the U.S.-allied Arab states and Qatar, and said he thinks a deal could come quickly.

Axar.az reports citing Reuters that, “If I can help mediate between Qatar and, in particular, the UAE and Saudi Arabia, I would be willing to do so, and I think you would have a deal worked out very quickly,” Trump said at a joint news conference with Kuwaiti Emir Sheikh Sabah al-Ahmad al-Jaber al-Sabah.

Saudi Arabia, the UAE, Egypt and Bahrain cut diplomatic and trade links with Qatar on June 5, suspending air and shipping routes with the world’s biggest exporter of liquefied natural gas, which is home to the region’s biggest U.S. military base.

“What is important is that we have stopped any military action,” Sheikh Sabah said.

While both sides in the dispute have ruled out the use of armed force, some ordinary Qataris have said they worry about the possibility of military action, given the ferocity of the criticism their country has received from media in the four Arab states.

Sheikh Sabah said he had received a letter from Qatar that expressed willingness to discuss a list of 13 demands from its neighbors.

“We know that not all of these 13 demands are acceptable,” Sheikh Sabah said, referring specifically to issues that affected Qatari sovereignty.

“A great part of them will be resolved,” he said.

Qatari Foreign Minister Sheikh Mohammed bin Abdulrahman al-Thani told Al Jazeera TV that any mediation had to come “without conditions”, reiterating that Doha would not negotiate while transport links with neighbors remained cut.

The Arab powers responded with a joint statement accusing Qatar of putting preconditions on negotiations which it said showed a lack of seriousness in resolving the dispute.

The four countries reiterated an accusation that Qatar continued to finance terrorism and interfere in the internal affairs of other countries.

Qatari officials have repeatedly said the demands are so draconian that they suspect the four countries never seriously intended to negotiate them, and were instead seeing to hobble Doha’s sovereignty. At the same time, they have said Qatar is interested in negotiating a fair and just solution to ‘any legitimate issues’ of concern to fellow Gulf Cooperation Council member states.

They expressed regret about the Kuwaiti emir’s comment about stopping military intervention.

“The military option was not and will not be (used) in any circumstance,” the statement said.