Model strips off on a packed New York - Video 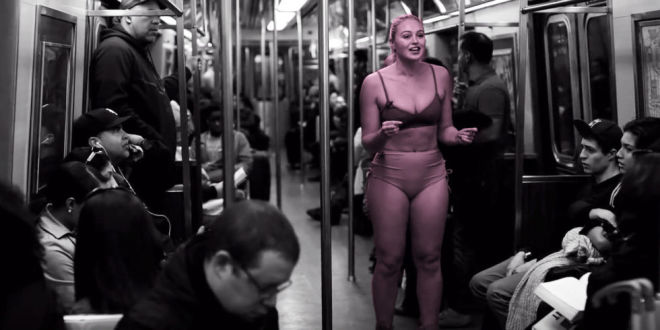 Model and activist Iskra Lawrence left commuters on a New York subway train more than a little surprised after she interrupted a journey to strip off.

The curvaceous beauty, 26, took off her dress to deliver a powerful speech about body shaming, leaving those close by not knowing quite where to look.

And after the model had passionately implored them to 'celebrate difference', they gathered themselves long enough to break out in applause.

The British model, who divides her time between the Big Apple and London, began her soul-stirring delivery only to be interrupted by an announcement on the train.

Looking a little flustered Lawrence, who has 2.8million followers on Instagram, started again, telling those on the train: 'This is bad timing!'

Wearing a black dress, she then launched into her speech, telling those around her she wanted to 'make herself vulnerable' to show how far she'd come on her 'journey' of self-acceptance.

Calling her body a 'vessel', Lawrence revealed how she grew up 'hating' herself because she didn't fit to the 'small standards of beauty' put on society by the media.

The video, created the day after America's election, sees her strip down to her underwear.

After posting the video last night, Lawrence wrote: 'I strip down to share my voice and use my power to start a conversation about the relationship with ourselves and each other.

'We all have our own unique power and sharing it with the world is something really special and hopefully the more we can listen and learn from each other we become more open minded and less judgmental.'

She added: 'At the end of the day we are all one race, the human race and we are all equal.'

The feedback to her video is largely positive, with many applauding the star for making a stand against body-shaming.
p.barthova wrote: 'How great! Love this and your message so much! You're such an role model an inspiration!'

However, some of the feedback suggested that the speech hadn't quite delivered the impact Lawrence might have hoped for.
Ironmonkey1978 wrote: 'I don't think those people on the tube give two hoots what she saying.'

rudeboi_mj added: 'Didn't have to dress like that to give your speech. You're just doing exactly what you're telling them not to do.'
itadowI said: 'Can see she did not grow up riding on the subway. As a teen and young woman I came across many a pervert. The subway is not a place to be undressed. Hope she has a body guard.'

classeyahI added: 'Like your message but the only problem is that you always show waaaay too much skin.'

The model has frequently used her high profile to talk openly about accepting different body sizes and the need for the fashion industry to stop using models that don't represent real women.