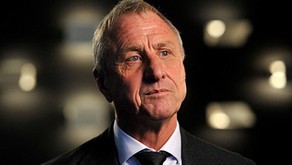 Cruyff helped his country reach the World Cup final in 1974, where they lost to West Germany.
In February, Cruyff said he felt he was "2-0 up in a match" against lung cancer and he was "sure I will end up winning".

Widely regarded as one of the greatest players of all time, Cruyff had double heart bypass surgery in 1991.
Barcelona won four consecutive La Liga titles from 1990-91 to 1993-94 under his guidance.