Bittersweet romance of Ali and Nino comes to Luxembourg 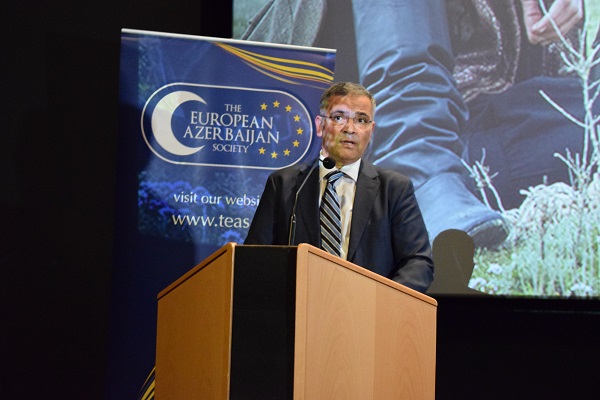 Luxembourg – which suffered under occupation during both world wars – played host to a screening of the new sweeping, emotional film epic Ali and Nino on 17 May. The screening took place at Kinepolis Kirchberg, one of the leading cinemas in the country.

The event was organised by the Benelux office of The European Azerbaijan Society (TEAS), in collaboration with the Azerbaijani Embassy to Belgium, the Netherlands, Luxembourg and the EU. It was attended by around well over100 members of the Azerbaijani diaspora, friends of Azerbaijan and cinephiles. Dozens of people were disappointed as demand for tickets outstripped the cinema’s capacity.

Written exactly 80 years ago in German by the enigmatic Kurban Said, the novel Ali and Nino encapsulates the interreligious, multicultural and tolerant spirit of Baku that existed in 1918–20 during the period of the Azerbaijan Democratic Republic (ADR), which preceded seven long decades of Soviet domination. The novel is largely set in Icheri Sheher (Baku Old City), although the action also takes place in Dagestan, Ganja, Tbilisi, Tehran and Shusha, an Azerbaijani cultural hub in Nagorno-Karabakh that is currently under illegal Armenian occupation.

In 2016, this film adaptation of this legendary novel was released, directed by Oscar-winning British director Asif Kapadia (probably best-known for his documentary films on racing driver Ayrton Senna and singer Amy Winehouse). The film has a script by Oscar-winning screenwriter Christopher Hampton. The Executive Producer is Leyla Aliyeva, Vice-President, Heydar Aliyev Foundation.

Marc Verwilghen, Director, TEAS Benelux, said: “Tonight’s screening comes at a pivotal point in EU–Azerbaijani relations, as negotiations are currently taking place, aimed at creating a new level of co-operation. This comes in the wake of a visit of Azerbaijani President Ilham Aliyev to Brussels that included meetings with representatives from all European institutions.

“The EU needs Azerbaijan. Strategically, as it is at the crossroads of Europe and Asia,. This is in an extraordinary situation, and would be considered a ‘Triple A’ in real estate terms, being located on the old Silk Road. Azerbaijan is also a member of NATO’s Partnership for Peace programme, as well as the EU Eastern Partnership and many other international organisations. Politically, Azerbaijan is important as a neighbour of the EU, with Russia, Iran and Turkey as three other neighbouring countries. Culturally Azerbaijan is a force against radicalism and intolerance. Finally, in terms of energy flows, Azerbaijan is crucial because of the construction of the Southern Gas Corridor, which will increase supply diversity for EU countries.

“Azerbaijan is a modern country that ensures cohabitation and tolerance, cultural diversity, acceptance of ethnic minorities. It also plays its role in countering terrorism, at a time when we have seen attacks in many European cities, including Paris, Brussels and London.

“Ali and Nino is the Romeo and Juliet of the Caucasus, set amidst the décor of an incredible natural theatre. The film depicts the romance between the Muslim Ali and Georgian Princess Nino, and shows the establishment of the ADR, which existed from 1918–20, and ended with the Bolshevik invasion of Azerbaijan.

“But – as Ali and Nino shows us – Hope has no borders, Fate has no boundaries and Love has no limits.”

H.E. Fuad Isgandarov, Ambassador of the Republic of Azerbaijan to Belgium, Luxembourg and the EU, concluded: “Following the recent successful screening of Ali and Nino in the European Parliament, the European Commission has also shown an interest in hosting this film. In my view, this is not a Romeo and Juliet story, as that revolves around two families who are in conflict. However, Ali and Nino shows two friendly independent nations – Azerbaijan and Georgia ¬– that exist in a state of brotherhood.

“Next year we will celebrate the centenary of the ADR – which constituted our first independence. The film shows the difficulties of achieving and sustaining this independence. The ADR extended the franchise to all women over the age of 18 just under a century ago, predating this achievement in many European countries and the US. The ADR government comprised many nationalities, including Jews and Armenians. This demonstrates the tolerance and friendliness of Azerbaijanis.

“The film also reiterates the need for all countries to achieve and retain their independence. If they are independent partners in the EU neighbourhood, then Europe will also further develop.”

The event was preceded by a reception, the highlight of which was the renowned aperitif Ratafia de Champagne Exclusive, which has been produced by the Jean Goyard house since 1911. This amber delight, replete with aromas of candied fruit, was described by Alexandre Dumas – who wrote warmly of his visit to Azerbaijan in 1858 – as an “incomparable elixir.”