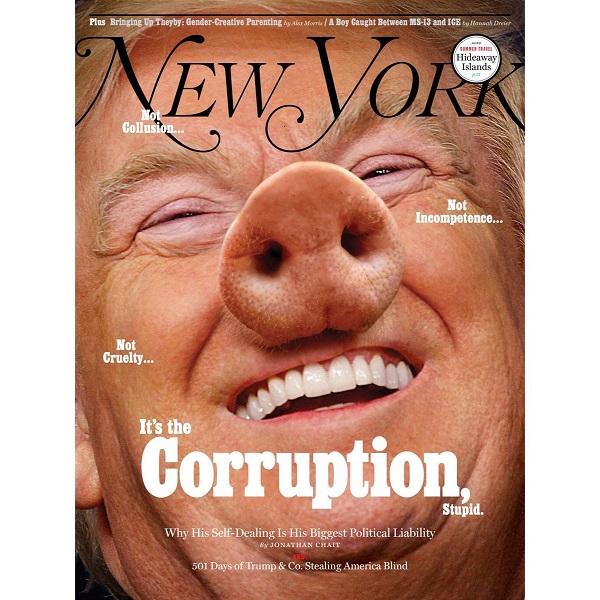 New York Magazine is taking a harsh swipe at President Trump Donald John TrumpNew York Magazine cover depicts Trump as a pig GOP lawmaker: Republicans 'would be well advised to get ready' for Dem wave in midterms Tech giants brace for sweeping EU privacy law MORE with its new cover depicting the president as a pig.

The April 2 issue of the magazine features a close-up photo of Trump with a pig's snout replacing his nose.

The cover story, "Corruption, Not Russia, Is Trump's Greatest Political Liability," hits Trump for what it claims is "corruption" and "greed" in nearly all aspects of his presidency, from his political appointees to his decision to let his sons take over his business after he took office.

"Since Trump took office, his pledge to ignore his own interests has been almost forgotten, lost in a disorienting hurricane of endless news," New York Magazine's Jonathan Chait writes. "It is not just a morbid joke but a legitimate problem for the opposition that all the bad news about Trump keeps getting obscured by other bad news about Trump."

"Not only has Trump made no effort to raise ethical standards but he and his administration have flamboyantly violated the existing guidelines," Chait writes. "Lobbyists are seeded in every agency, 'regulating' their former employers and designing rules that favor bosses over employees and business owners over consumers."

The article comes amid a staff shakeup among some of Trump's top officials, and mounting scrutiny over his and his son-in-law Jared KushnerJared Corey KushnerNew York Magazine cover depicts Trump as a pig Kushner's father on family scrutiny: 'We didn't do anything wrong' Trump: Both Easter and Passover 'remind us that God redeems the world' MORE's foreign business dealings.

Trump has been the target of unflattering magazine covers before, including Time Magazine's depiction of his hair on fire, and Der Spiegel's portrayal of Trump as a "devolved man."