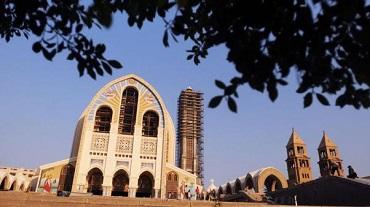 "As of today, we have stopped the construction. As for the referendum and the construction, you and I have discussed that the construction will wait until a decision is made on public opinion. The next thing is that we have to come to an agreement on the remaining parks and gardens regardless of what takes place in this one," the mayor said.

Earlier on Thursday, Russian President Vladimir Putin has suggested polling the residents of Yekaterinburg before making a decision whether to push ahead with the plans for building the cathedral. The mayor later informed that the survey would take at least 20 days.

Since May 13, unauthorized rallies have been going on in Yekaterinburg against plans to rebuild Saint Catherine’s Cathedral in a park instead of its original site. As of May 16, 96 people have been detained for taking part in unsanctioned protests.