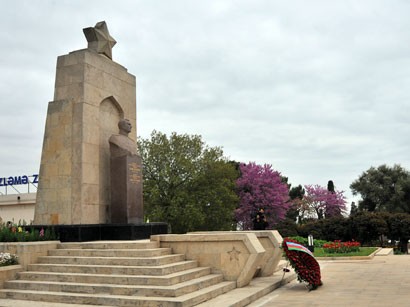 On May 9, Azerbaijan marks the Day of Victory in the Great Patriotic War.

Years of the WWII (World War II) in the 20th century were the most difficult for all the mankind.

During the war, Azerbaijanis showed courage and heroism not only on the frontline, but in the back front as well. A battalion of 87 jet fighters and 1224 self-defense groups were created in the country in a very short period of time.

More than 600,000 young Azerbaijani boys and girls were sent to the front between 1941 and 1945. Divisions from Azerbaijan have walked from the Caucasus to Berlin.

About 130 Azerbaijanis earned the name of "Hero of the Soviet Union", 30 more deserved the "Order of Honor". Some 170,000 Azerbaijani soldiers and officers were awarded various USSR orders and medals.

Such people as Hazi Aslanov (twice the Hero of the Soviet Union), other Heroes of the Soviet Union - Israfil Mammadov, Aslan Vezirov, Adil Guliyev, Ziya Bunyatov, Geray Asadov, Melik Maharramov and Mehdi Huseynzadeh, generals Mahmud Abilov, Akim Abbasov, Tarlan Aliyarbeyov and Hajibala Zeynalov and many others brought honor to the history of the Azerbaijani people.

Much has been done in the country, to direct the economy towards the frontline.

Light and food industries started working for the front. In a short period of time Baku turned into a real arsenal of a fighting army. Despite all the difficulties, Azerbaijani oil workers worked hard to supply the front and the industry with fuel.

It should also be noted that a new aviation petrol-producing technology was created under supervision of academician Yusif Mammadaliyev.

With the hard work of Azerbaijani oil workers, the oil production in Azerbaijan reached its peak in 1941 - when 23.5 million tons of oil was produced, making up 71.4 percent of all the oil produced in the USSR.

One can say with confidence that Baku's oil was one of the main factors in gaining victory in the Great Patriotic War. It should be noted that each fourth of five planes, tanks and cars, worked on Baku's fuel.

WW II once again proved the heroism and courage of Azerbaijani people.